Cover Reveal ~ Reviving Evan
The much-anticipated novella from the Evan series! Having gotten a perspective from Gavin Ferguson immediately following the traumatic dismantlement in "Dismantling Evan" in two novelettes (Saving Gavin and Resurrecting Gavin), fans were ready to see how life would continue for Evan and all of the friends. That is where Reviving Evan fills the gap in the time immediately following the "dismantlement" but before some life changing events for this band of friends and ultimately Evan throughout the remainder of the series. 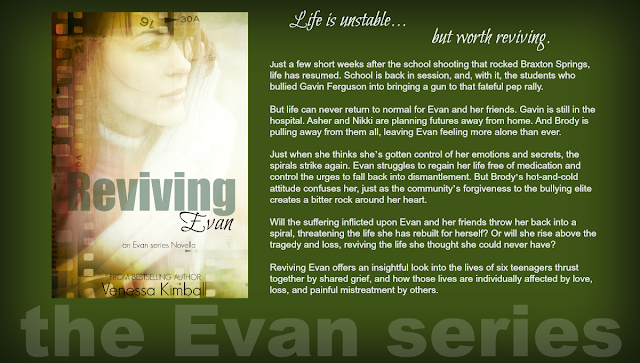 All books can be purchased on Amazon Kindle or paperback
(Reviving Evan's paperback will contain Saving Gavin and Resurrecting Gavin once it releases)
Visit Venessa Kimball's Amazon page to download:
http://www.amazon.com/Venessa-Kimball/e/B008HFW8CS

The release party is on November 13  but it isn't just a one-day thing. Let me explain. There will be a cover reveal and release party celebration for each book as it releases until the ENTIRE series is published.
Cool, right?

It is on Facebook, so join the event and you will be kept up to date on each cover reveal and release day until the series has reached its finale. Join in anytime since it is a progressive party! 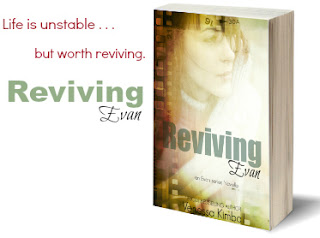 Want to learn more about Venessa Kimball's books?
Get your free e-book from Venessa now!
http://www.venessakimball.net/#!your-free-book-is-waiting-/cvjg 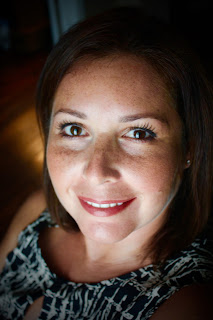 Venessa Kimball
Having always been passionate about the written word, Venessa Kimball embarked on writing what would become her debut novel, Piercing the Fold: Book 1; a young adult/ adult crossover, paranormal, science fiction, dystopian series. July 2, 2012, Venessa Kimball independently published the first book in the Piercing the Fold series. Book 2, Surfacing the Rim, released March 14, 2013.
In August of 2013, Venessa joined the publishing house, Crushing Hearts and Black Butterfly. The Piercing the Fold series has been re-published with CHBB beginning with Piercing the Fold: Book 1 on September 3, 2013. Surfacing the Rim: Book 2 re-published on September 24, 2013 and Ascending the Veil: Book 3 released November 2013. The fourth book in the series, Transcending the Legacy: Book 4 released May 13, 2014.
Venessa’s latest project, YA/Teen Contemporary Fiction Evan series has already produced one poignant and riveting novel, Dismantling Evan, and two novelettes (Saving Gavin and Resurrecting Gavin).
Reviving Evan novella is the newest addition and  two more full-lengths  will follow within 2016 and 2017; Inventing Evan and Capturing Evan.

Venessa is currently working on an Adult Contemporary Romance to be released in 2016 in between the Evan series continuation.

As for the future, Venessa is already filling her Work-In-Progress folder. When she is not writing, she is keeping active with her husband and three children, chauffeuring said children to extracurricular activities, catching a movie with her hubby, and staying up way too late reading.